Just like my wife, our seven year old daughter, Talise, takes her food seriously. So seriously, in fact, that withholding a snack (or threatening to do so) is a wonderful disciplinary tool. But that’s another topic.

We never knew just how much Talise loved popcorn until I shared a bag of microwave popcorn with her at home while we watched a movie. My wife does not care for the stuff so it was just Talise and I scarfing it down. We discovered that we could eat a bag in five to ten minutes, tops.

My wife and I observed that if all the popcorn was dumped into one big bowl, then Talise would be worried that papa was eating too fast (and therefore too much of my share). That’s when the bickering would start – and it would continue until the last piece was gone. Talise would tell me not to eat so fast and she’d try to keep me from reaching into the bowl. So I’d tease her by taking a big handful of popcorn and she’d squawk. By the second or third time we had popcorn she asked for separate bowls. And that’s when she demanded at least half of the popcorn.

The last time we had popcorn, Talise, who usually sits between her mom and I, purposely sat on the other side of her mom just to be out of reaching distance from me so I couldn’t steal any of her popcorn. What fun times!

And so, the saga continued when Talise discovered Doritos, which I love even more than popcorn. On more than one occasion, I’ve raided the pantry and devoured a whole bag in a few days before she could have but a few chips. Recently, my wife 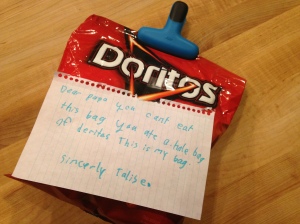 came home from grocery shopping with two bags of Doritos. Not being able to help myself, I polished off one bag in two days. The next night, when I reached for the second bag, I discovered a stern note taped to it.  “Dear papa You cant eat this bag You ate a hole bag of deritos This is my bag. Sincerely Talise.” Priceless.