We just read yet another financial article, The American Dream Shrinks, that says how the middle class are getting poorer and the rich are getting richer. That may be true, but one doesn’t necessarily result from the other.

The fact that the middle class is getting poorer is not because rich people are taking our money. We (the authors) are middle class, yet we are not poorer since the national financial fiascos starting in 2007 (initially, yes, but not once the storm calmed). In fact, we bought a house at the height of the housing “bubble” and actually paid it off during the recession.

Yes, we lost half of the money we had in the stock market. And our house value slumped. But in 2007 we had no other debt but the mortgage, no car payments, no student loans, no credit card debt or any other payments. Granted we’ve been able to keep our jobs while we continued to live cheap, drive older paid-for cars and save. All the extra money we could squeeze out of each month’s budget we put on the house.

The stock market has made comebacks since then. So overall, we’re at least where we were in 2007 or better. But the point is – we did not end up poorer, because we’ve finally wised up about preventing others from taking our money (usually in the form of interest payments, but also in frivolous purchases). 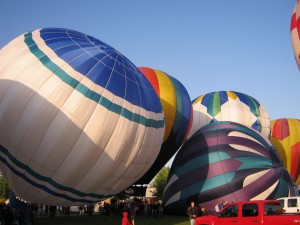 Job losses, health issues and other crises can bring on financial challenges, even disasters. But it doesn’t always have to be the case. With no debt, it is much, much easier to weather the storms.

If the rich are getting richer, it’s only because they have figured out how to weather the storms. Understand this: Rich peoples’ houses (if they are big and fancy) can drop in value way more than modest sized houses after a bubble burst and are harder to sell. Rich peoples’ stock market investments drop as much as they do for the rest of us in a crash too. They’re not immune to economical disasters, usually just better prepared for them.

And that can be us – prepared for the bubble bursts, the job losses, the market dips and other unexpected hits to our finances. The first thing to do is get out of debt! It’s surprising how little you can actually live on if you have no debt.

We know a couple who has very little debt other than the mortgage. The husband lost his job. The wife works just thirty hours per week. They can still make their house payment and even continue to save some money on one income because their debt level is so small.

Getting out of debt is the only way to go, folks. Let’s quit blaming the rich for making us poor. Because it’s really not them doing it.